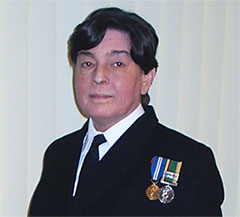 Born in Ashton-under-Lyne, Janet was educated at Broadoak Primary, then Heartshead Secondary School before starting work for the Co-operative Insurance Society in 1975. She undertook a variety of roles culminating in that of Team Manager and Business Analyst before retiring in 2009 to devote more time to the Sea Cadets.

Janet joined the Sea Cadets, at Tameside, in 1975 rising to Third Officer where, in 1980, she was appointed in command of the Girls Nautical Training Contingent of the Sea Cadets. Moving on to the North East Lancashire District in in 1987, she was promoted to Lieutenant Commander in 1994 on her appointment as District Officer.  In 2006 she became the Senior Staff Officer for the North West of England and was promoted to Commander in 2009.

In addition to her routine responsibilities with the Sea Cadets, Janet assisted with the organization of and led the Sea Cadet arena displays at the Manchester Military Tattoo. She later went on to support the Commonwealth Games in Manchester where she took an active part in coordinating the various Sea Cadet elements involved in the welcoming and opening ceremonies and in particular the flag raising.

Janet’s passion for youth in the community stretches out to her involvement with the ‘Youth United’ working group, which seeks to share best practice and promote uniformed youth groups in the community.  She is a keen supporter of our armed forces, encouraging the youth to engage in the Lord Lieutenants Cadet Poppy Appeal in which she has been involved since its inception.

Janet is married to Mark; together they have one son who, together with Jenna, have two children, Amy and Chloe; she was made a Deputy Lieutenant and awarded an MBE in the Birthday Honours list in 2013.

Sadly, on Thursday 3rd November 2022, Janet passed away whilst receiving treatment in hospital. She will be sorely missed by everyone.