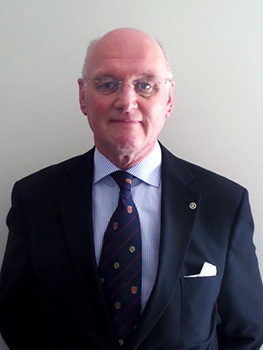 Ian was born in Rochdale in 1949 and is married to Janet. They have one daughter and two grandchildren.

He was educated at Rochdale Technical School for Boys, before joining the family retail business. In 1969 he expanded the business and started a new retail business in art and craft materials, which later developed into fine art and quality gifts.  The company has traded on Drake Street, Rochdale for over forty five years.

Having been involved in fundraising all his working life, and now retired, Ian continues with his voluntary work with a passion. He is a past member of Rochdale Round Table 55 and currently a member, and past president, of the Rotary Club of Rochdale East as well as a member of Roch Valley forty one club and a past president of the Rochdale Chamber of Trade. Ian was appointed a Justice of the Peace in 1992 and became chairman of the advisory committee for the appointment of Justices; he is presently on the Supplemental list. Ian is a Trustee and Director of The Fusilier Museum, a member of The Royal British Legion (Rochdale Branch) and is  a volunteer at Rochdale Foodbank.

Shortly before retiring Ian formed IJS Promotions, agroup that organises charity concerts that have been held throughout the local area using world famous brass bands and raising funds for many local and national charities.

Ian’s interests are reading, watching Rochdale AFC and spending as much time as possinle with his family.