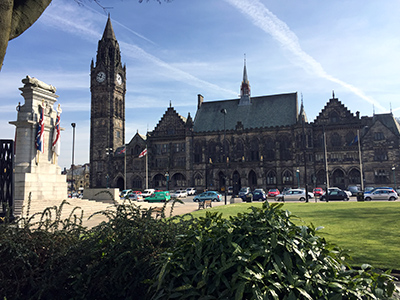 Rochdale is a market town in the North West of England and nestles in the foothills of the Pennines and is surrounded by outstandingly beautiful scenery.

Originally, when “cotton was king”, there were around 300 mills, spinning and weaving, producing the fabric for which Lancashire was famous. Indeed, it was the deprivation of those very cotton workers which stimulated the modern co-operative movement, when, on 21 December 1844 the Rochdale Equitable Pioneers Society opened their store selling pure food at fair prices and using honest weights and measures.

The wealth of the mill owners provided the wherewithal to build the magnificent Town Hall  – described by John Betjeman as the most beautiful in Britain and splendidly dominates the town centre.

Today, the modern Rochdale MBC comprises not only the original Rochdale but includes the old mill towns of Middleton, Heywood, Milnrow and Littleborough, although many of the residents of those towns still do not wish to be thought of as Rochdalians, their own identity is very important to them.

There is an extensive mix of nationalities and cultures resulting in a huge diversity of restaurants and religious meeting places. There may no longer be the traditional mills to offer employment but these have been replaced by a wide variety of different industries.

In terms of recreation there is a thriving football club and a long-standing Rugby League Club, a reinvented and thriving market, Touchstones Art Gallery and also the Pioneers Museum which outlines the history of the co-operative movement. Standing above all of it is the ancient parish church of St Chad, keeping watch over her flock as she has done for hundreds of years.