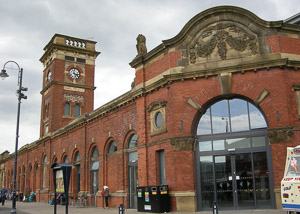 The Metropolitan Borough of Tameside, named after the River Tame which flows through the heart of the borough, was formed in 1974 bringing together the nine towns of Ashton-under-Lyne, Audenshaw, Denton, Droylsden, Dukinfield,  Hyde, Longdendale, Mossley and Stalybridge.

The borough covers around 40 square miles and has a population of approximately two hundred and sixteen thousand people.  Ashton under Lyne is the administrative centre of Tameside. It was during the industrial revolution that small rural settlements grew into thriving centres of commerce.

Nowadays, it is a thriving, bustling borough which attracts a wide range of new businesses.  There are many festivals and events including renowned Brass Band Competitions and there has been a multi award winning Indoor Market at Ashton under Lyne for over 700 years.  Sadly, in 2004 the historic Market Hall was destroyed by fire.  The rebuilt Hall was finally reopened in 2008 with an up to date interior that retains some of the quirkiness of the past but with much improved facilities.

Tameside has a wonderful mix of cultures, religions and ethnic groups. There is a broad range of excellent schools and colleges and there are recreational centres across the borough offering the widest range of sporting and health facilities.  Also, there are a large number of parks, some with the prestigious Green Flag Award, as well as plenty of open spaces.  It also has a vibrant night life.

Tameside is a borough where the residents feel at home, are able to get involved in the life of the community, and where they can contribute to a prosperous local economy. In all, Tameside is a great place to live.