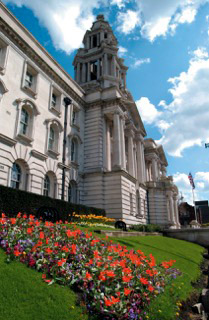 A focal point originally of Roman roads and a Saxon Village, commenced the history of Stockport. A Charter of Freedom was granted in 1220 for the town and in 1974 it became a Metropolitan Borough Council.

Stockport has a vibrant and diverse economy with a skilled workforce. Given its proximity to Manchester International Airport, the M60 and direct rail links to other major conurbations; it continues to be an attractive place in which to live and work. All trains from Manchester to London pass over its famous viaduct. Built in December 1840, roughly 11 million bricks were used in its construction; at the time of its completion, it was the world’s largest viaduct and a major feat of engineering.

The Borough has numerous parks, including the famous Lyme Park, which abuts its boundary, many historic buildings, museums, art gallery, theatres and cinemas and swimming pools, with abundant leisure and recreational facilities across the borough. Stockport benefits from a good range of hotels and conference facilities with easy access to the Peak District.

A warm and friendly Borough, full of variety and interest.