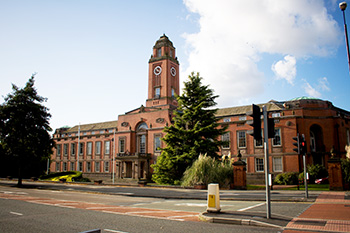 The Borough of Trafford was formed on 1st April 1974 by the Local Government Act 1972 as a merger of the municipal boroughs of Altrincham, Sale and Stretford, the urban districts of Bowdon, Hale and Urmston and part of Bucklow Rural District.  The River Mersey flows through the borough separating North Trafford from South Trafford.

With an estimated population of approximately 211,800 and covering 41 square miles, Trafford area has a long heritage with evidence of Neolithic, Bronze Age and Roman activity, and today has over 200 listed buildings.

Trafford is the home of Manchester United Football Club and Lancashire County Cricket Club and since 2002 the Imperial War Museum North.  It has a strong economy with low levels of unemployment and contains both Trafford Park industrial estate and the Trafford Centre, a large out-of-town shopping centre.  Another highlight of Trafford is Dunham Massey Estate, a stately home owned by the National Trust.

With a wide mix of ethnic and religious groups, excellent schools and community activities for all ages, Trafford is a great place to live.