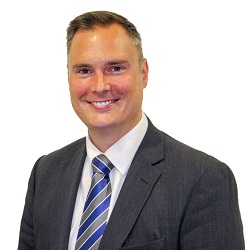 Glyn Potts is Headteacher of Oldham’s Roman Catholic High School, Blessed John Henry Newman RC College. His venture in education started in 2004 when he became a Learning Mentor at Our Lady’s RC High School in Royton, Oldham. Glyn began his teacher training here, qualifying in English in 2006. Since then, he has held various positions of responsibility at Our Lady’s until a merger with another Catholic High School in 2012 to form Blessed John Henry Newman RC College. In September 2018, Glyn became Headteacher of Newman where he remains.

Glyn gained his degree through Manchester Metropolitan University in 2004 with honours. Glyn was recognised as the ‘Inspirational Teacher of the Year’ in 2010 by the Worshipful Company of Educators and shortlisted for the ‘Agent of change’ award through Northern Power Women in 2022. He has a Masters Degree in Catholic Education and a vocational equivalent in Strategic Youth Leadership and Management from City & Guilds through the Cadet Vocational Qualification Organisation.

Glyn has been a long-time volunteer with the Army Cadet Force having done over 24 years of service. He occupied various roles in the organisation including being a detachment commander at Belle Vue Detachment, County Training Officer and was the longest serving Deputy Commandant of Greater Manchester ACF, appointed to the role at aged 29. He is currently Deputy Colonel Cadets for HQ North West region and continues to champion the opportunities such organisation offer young people.

Glyn is married to Khera and then have one son, Joseph. The family are proud Mancunians and undertake charity work in support for youth work and those affected by cancer.

Glyn was awarded the MBE in 2022 for services to Education and to the Army Cadet Force.