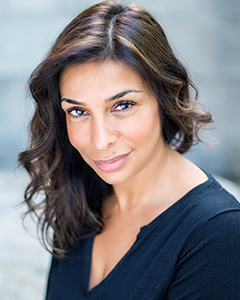 Shobna has become a household name for her role as Anita in Victoria Wood’s “Dinnerladies” and as Sunita , in ‘Coronation Street’. She also wrote and directed a one minute short film ‘AKSHAY’, which continues to show at film festivals across the world and was shortlisted for The Satyajit Ray , short film award.

On radio, her own late night show on BBC Radio Manchester, and has appeared in four afternoon plays for BBC Radio 4, most recently in ‘Chequebook and Pen’ written by and with Johnny Vegas and ‘ Shamed’ by Furqhan Akhtar.

Shobna has written and directed the critically acclaimed comedy show for young women ‘The Masala Girls’.

Film credits include ‘Shadowscan’, directed by Tinge Krishnan, won a BAFTA in 2001.  ‘Ashes’  ‘Honey and Razerblades’ and ‘Junkhearts’.

Shobna has worked extensively in theatre and in all community and education settings across the UK as choreographer and dancer.  Between 1992 and 1994 she was a dance animateur for Yorkshire and Humberside and was awarded an honorary doctorate from The University of Huddersfield. She is Chancellor of The Children’s University, Oldham.

Shobna uses her cooking, teaching dance and drama skills as well as her profile as a successful actress to full use by raising money for various charities across the North West, concentrating most of her efforts on children and young peoples needs across abilities and our diverse communities. She is actively involved in raising the profile of many charitable and voluntary organisations locally and nationally, volunteering her time and energy whenever she can.

Shobna has been a TV Panelist on  ‘Call My Bluff’, ‘Have I got News for You’, and  ‘Countdown’ and is a regular on ITV’s ‘Loose Women’ and was a semi-finalist in Masterchef for the BBC and has appeared in Soapstar Superstar and Stars in their Eyes for ITV.  Documentaries include: Empires Children (Channel 4) , Disappearing Britain, (More4).