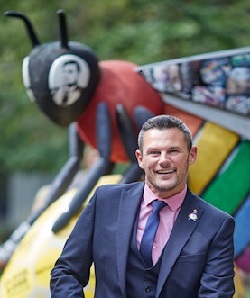 After joining the RAF at 19 Carl Austin-Behan was sadly forced out due to his homosexuality, but not before he found his name on the 1996 Queen’s Birthday Honours list for his exceptional service, which included saving a pilot from a burning aircraft as well as other remarkable endeavours.

In his post-RAF career Carl has found great success in a whole host of areas including business, charity, community, politics and beyond.

He raised money for numerous worthy causes including the HIV/AIDS crisis and Alzheimer’s UK (which involved a trek to Mount Everest!) amongst others.

LGBT issues have always been close to Carl’s heart, which is why in 2005 he was appointed Chair of Manchester’s Gay Village Business Association and between 2008 and 2011 he was a member of the Greater Manchester Police Independent Advisory Group, supporting LGBT issues.

Soon after, Carl successfully ran to become Labour Member for Burnage Ward and was also appointed to other important posts within his community.

In 2015, after marrying his long-term partner Simon, Carl became the first openly gay Lord Mayor of Manchester leading to unshakeable action for the LGBTQ+ community and help in raising over half-a-million pounds for the ‘We Love Manchester’ charity.

In 2018 Carl broke new ground yet again when he was made LGBT Advisor to the Mayor of Greater Manchester, Andy Burnham, where to this day he spends a lot of time and energy visiting schools, youth groups, workplaces (both public and private sector) to promote diversity, equality, inclusion and respect.

Carl was awarded an OBE for services to charity and LGBT Equality in the New Year’s Honours List 2020.