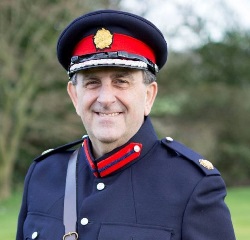 Eamonn was formerly the managing editor of Trinity Mirror’s regional publications and websites in the north of England. These include the Manchester Evening News and its associated weekly newspapers, as well as titles in Yorkshire and the North East. He is also an established broadcaster, having worked in television and radio for around forty years. He continues to present programmes on BBC Radio Manchester.

During his time in front of the cameras, Eamonn was recognised with The Royal Television Society Best Regional Presenter award. He became executive producer of ITV’s This Morning and was responsible for commissioning Granada Television’s regional programmes. During his time with ITV, he was Chair of the News Group Diversity Panel, and founder member and chair of both the Cultural Diversity Network (North) and the Broadcast Disability Network (North).

He has a long association with St. Ann’s Hospice as Patron, Chair of the Board of Trustees, CEO and most recently the Director of Strategy from which he stepped down at the end of 2021.

Eamonn has been a governor at various education establishments including St Joseph’s RC Primary School in Sale, Sale Grammar School and The Manchester Metropolitan University.

He was the inaugural chair of Trafford Youth Trust and is currently a trustee of a number of charities including: The High Sheriff Police Trust; The Salford Diocesan Trust; Caritas, Salford; The Dianne Oxberry Trust and Prevent Breast Cancer. He is also patron of the Wythenshawe Waste Warriors.

Eamonn was appointed as a Deputy Lieutenant in 2014 and was awarded an Honorary Doctor of Arts degree by The University of Bolton in 2015. He was High Sheriff of Greater Manchester, 2020/21.

Eamonn is married to Sheila. They have three grown-up children and two grandchildren.